Before 1239, the Counts of Burgundy gave the Moncley land as a fiefdom to the lords of Apremont, after which it stayed in this family for nearly 300 years. A fortified manor house, called a « fourteresse », was built in 1384.

In 1578, following several years of acquisitions, Louis de La Tour became head of the largest part of the manor of Moncley. He demolished the old fortified house and, on the edge of the cliff overlooking the River Ognon, built a fortified château surrounded by an enclosing wall with two gates, preceded by a moat.

This château, which was destroyed in 1867, had four round towers, one with six floors on the cliff side, plus a prison, a chapel, bedrooms and two square towers. The grounds contained two wells, a garden, large stables for 40 horses, a barn, a granary big enough to hold two hay carts and two main buildings, one of which, where the Lord of the manor lived, looked over the top of the cliff.

When Louis de la Tour went bankrupt, the title and the château were taken over by his nephew François de La Tour Saint Quentin (1557-1627) in 1608, and he handed it down to his descendants until 1660, when the estate passed to the Blictersvich family, then to the Belot family from 1728 to 1765, the Briot family from 1765 to 1777 and finally, from 1777, to the Terrier-Santans family and their descendants.

From the time of François I Terrier in the mid-16th century, the Terriers, originally from Vesoul in the ancient bailiwick of Amont, were lawyers and members of the Parlement (court of appeal), firstly in Dole until the French conquest of Louis XIV, then in Besançon until the Revolution.

Président à mortier (principal magistrate) of the Chamber of Investigations at the Parlement (appeal court) of Besançon and ironmaster, Marquis of Santans and Mailleroncourt, Lord of Cléron.

In 1777, he inherited the manor of Moncley.
As he wanted to receive his friends and relatives on his estate, he decided to demolish the old fortified manor house and build a new, splendid residence, entrusting the design to the highly talented Besançon architect Alexandre Bertrand (1734-1797).

In 1767, the Marquis married Jeanne-Baptiste-Andrée d’Arnaud de Prémont (1751 1814).
As President of the King’s Parlement, Lord and Chatelain, father of two emigré sons and an opponent of the Revolution, the Marquis was imprisoned in Besançon then Dijon from April 1793 to January 1795. After falling ill, he died in Besançon on 17 May 1796.

The eldest of the Marquis’ two sons, Charles-Suzanne was in school in Metz with his younger brother Sébastien when the Revolution broke out. Obeying their parents’ request, they left France in 1790 to study in Trier then, in November 1791 when the law on emigrés made them outlaws, they joined the Army of Condé in Worms. Charles-Suzanne fought for seven years against the Revolution alongside the Austrians, only returning to Besançon in October 1800. Then aged 27, he inherited the Château de Moncley, presiding over the completion of his father’s study (now the library), which he entrusted to the Besançon architect Denis Philibert Lapret. In the large rotunda salon, he also commissioned a ceiling to reduce the height of the room initially planned, and installed the false cut stone decoration.

In 1808, Charles-Suzanne married Jeanne-Claude Favières de Charme (1786-1862). As Parliamentary representative for the Doubs, the Marquis was Mayor of Besançon from 1816 to 1830.
Under his impetus, the forges and the village of Moncley enjoyed their heyday.

Married in 1832 to Caroline Frère de Villefrancon (1814-1846), who died suddenly after the birth of Marie, their fourth daughter.

Deeply affected by grief, Léonce divided his time between the Hôtel de Villefrancon on Rue Chifflet in Besançon, the Châteaux of Moncley and Villefrancon, and Paris, also travelling abroad on several occasions.
In the 1840s, the Marquis built a series of rooms on the ground floor of the château, leading on from the large rotunda salon. These three bedrooms and small library still have their original wallpaper (made by “Mader Frères” or “Desfossé & Karth”). Then, in 1867, he decided to demolish the old castle overlooking the village as well as the blast furnace and the forge buildings.

The son of Marie de Terrier-Santans (1846-1911) and Lieutenant-Colonel Ludovic Vyau de Lagarde (1836-1879), whose family were originally from the Nivernais, Henri, like his father before him, was a graduate of the École Polytechnique and an artillery officer.

A 20th century man, he brought electricity to the village, travelled by car and organised film showings at the château.

Shortly before the Great War, on the site originally planned by his ancestor and the architect, he and his wife built a chapel in the 18th century style.

When war broke out, the Count of Lagarde, who had resigned his commission in 1908, rejoined the army as a Captain and was killed on 31 May 1916 at the Fort of Tavannes near Verdun. He was posthumously awarded the title of Knight of the Legion of Honour.

Henri de Lagarde’s widow, the Countess, née Marie-Calixte Ferrand, was the mother of his two children, Jean and Odette.

In June 1940, the Château de Moncley was briefly occupied by the Nazis, who flew their sinister flag from the summit of the rotunda. It was then occupied again for three months in the winter of 1940-41. In June 1944, the Countess de Lagarde and her daughter Odette Lehideux helped the Resistance by lodging Anne Boilley at the château from June-July 1944. She was a coder-decoder for Pierre Jolinon, who organised the parachute landings into Burgundy and Franche-Comté.

On 5 September 1944, the château was once again briefly invaded by retreating German troops then, on the night of 9 to 10 September, the vast cellars offered shelter to the inhabitants of the villages of Moncley and Emagny, as they awaited the Liberation.

The Countess de Lagarde kept watch over the Château de Moncley for 60 years. With the help of many villagers, she managed to retrieve the furniture that had been stolen by the occupying troops in 1940. Her work resulted in the site being listed in 1942, followed by the château and its outbuildings on 13 January 1944. She then patiently supervised the many restorations during the 1950s.

Son of Henri and Marie-Calixte Vyau de Lagarde, Count Jean de Lagarde had a brilliant career as a French diplomat. Successively posted to Warsaw then Bucharest as Legation Secretary (where he actively participated in the “Balkans” network, transmitting intelligence and rescuing prisoners of war), then in San Francisco and New York as Consul General and finally in Mexico, Luxembourg, Senegal, Gambia and India as Ambassador.

Following on from his mother, Jean de Lagarde carried out many conservation and refurbishment works at Moncley, such as the tiling in the main vestibule. In 1981 he managed to get certain items of furniture and objects listed, to ensure their conservation.

A committed European, the Count de Lagarde was an Officer of the Legion of Honour and Commander of the National Order of Merit.

Following the death of his father-in-law, Pierre Bordeaux-Groult was actively involved for over 20 years in the renovation of the château and its grounds, its management (hiring out the château for weddings) and activities (organising competitions for broodmares and their foals). Concerned about the family archives, he made sure they were scientifically classified and methodically analysed.

In 2003, to protect the residence and the estate, Pierre and Marie Calixte Bordeaux-Groult obtained listed Historical Monument status for the whole of the estate, the château and its park.

Pierre Bordeaux Groult was an Officer of the Legion of Honour, recipient of the War Cross 39-45, Chevalier des Palmes Académiques, Knight of the Order of Merit of the Federal Republic of Germany and recipient of the Bronze Star.

Liselotte is the eldest daughter of Pierre and Marie-Calixte Bordeaux-Groult.
In the spirit of her parents and her ancestors, Liselotte and her Australian husband Timothy Sullivan are energetically and passionately continuing the work to restore and showcase the property and open it up to more and more people.

“Sharing with others the love of this historical monument that I’ve been so lucky to grow up in has become very natural to our family. Together with my Australian husband, a hotel and catering specialist, we want to offer the most wonderful experience possible, in every sense. Each restoration or creation at Moncley is done in collaboration with the best experts, to ensure it meets the expectations of people who love Beauty.” 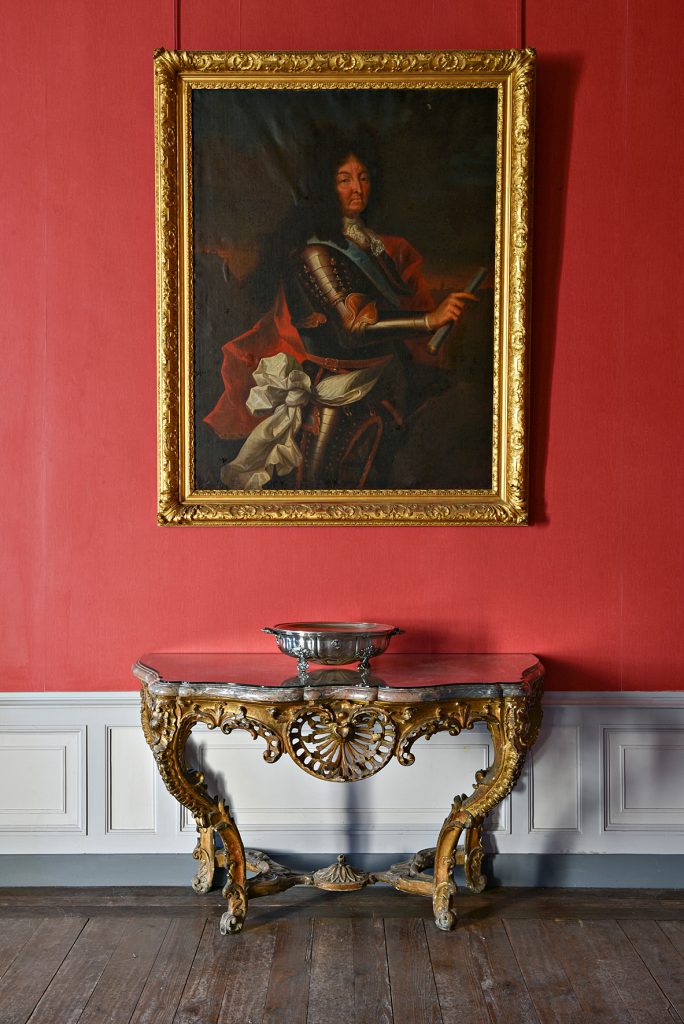